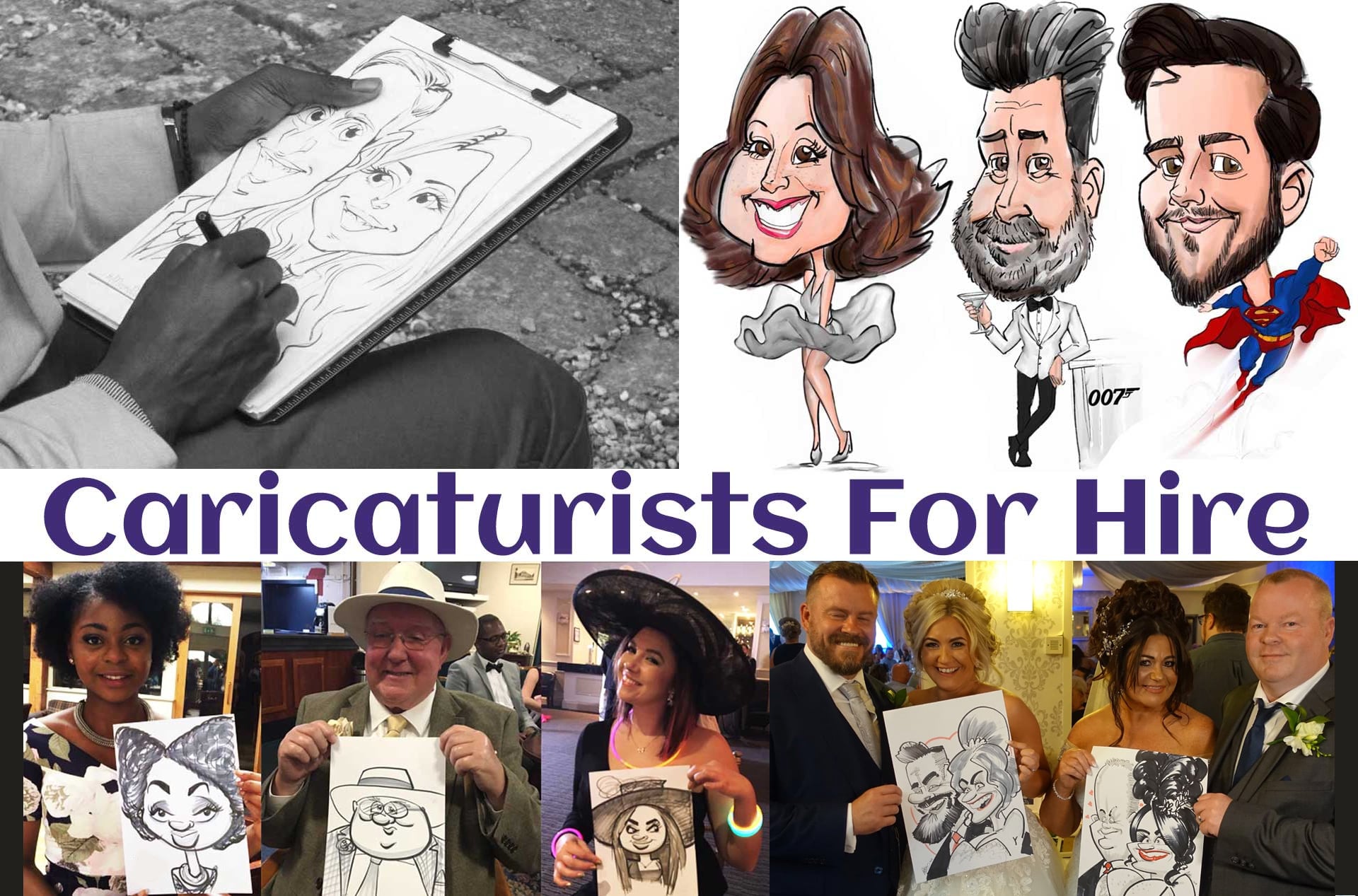 So you are holding an event in Oxfordshire and have started the search for some superb entertainment to make your party go with a bang! Magical Memories can help you hire a caricaturist in Oxfordshire and the surrounding areas and take any stress out of the booking process from start to finish. Hiring a caricature artist local to your Oxfordshire event is the perfect icebreaker and the best way to bring a smile to the faces of your guests of all ages. The person attending will certainly add a lot of fun to the proceedings. 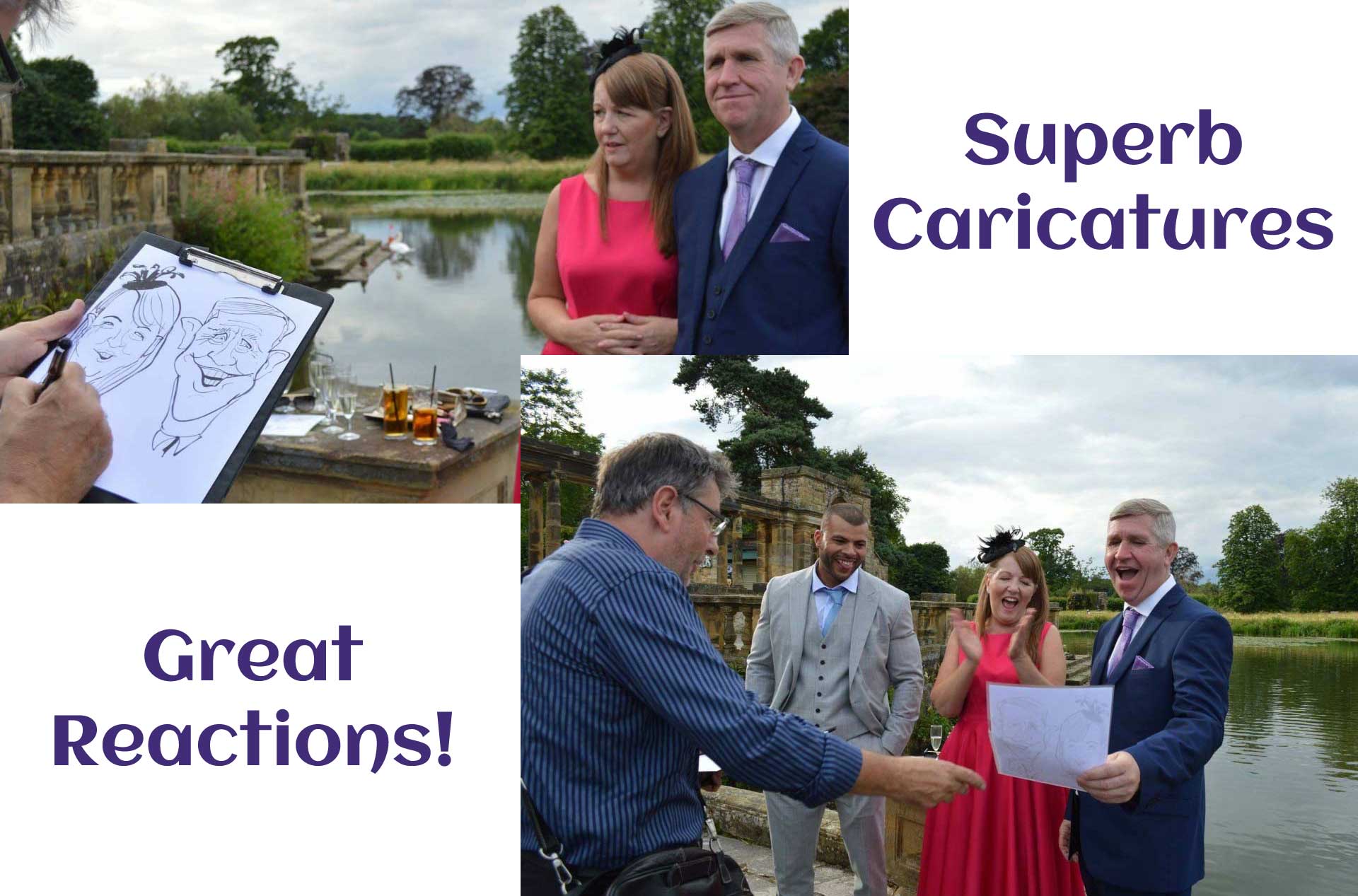 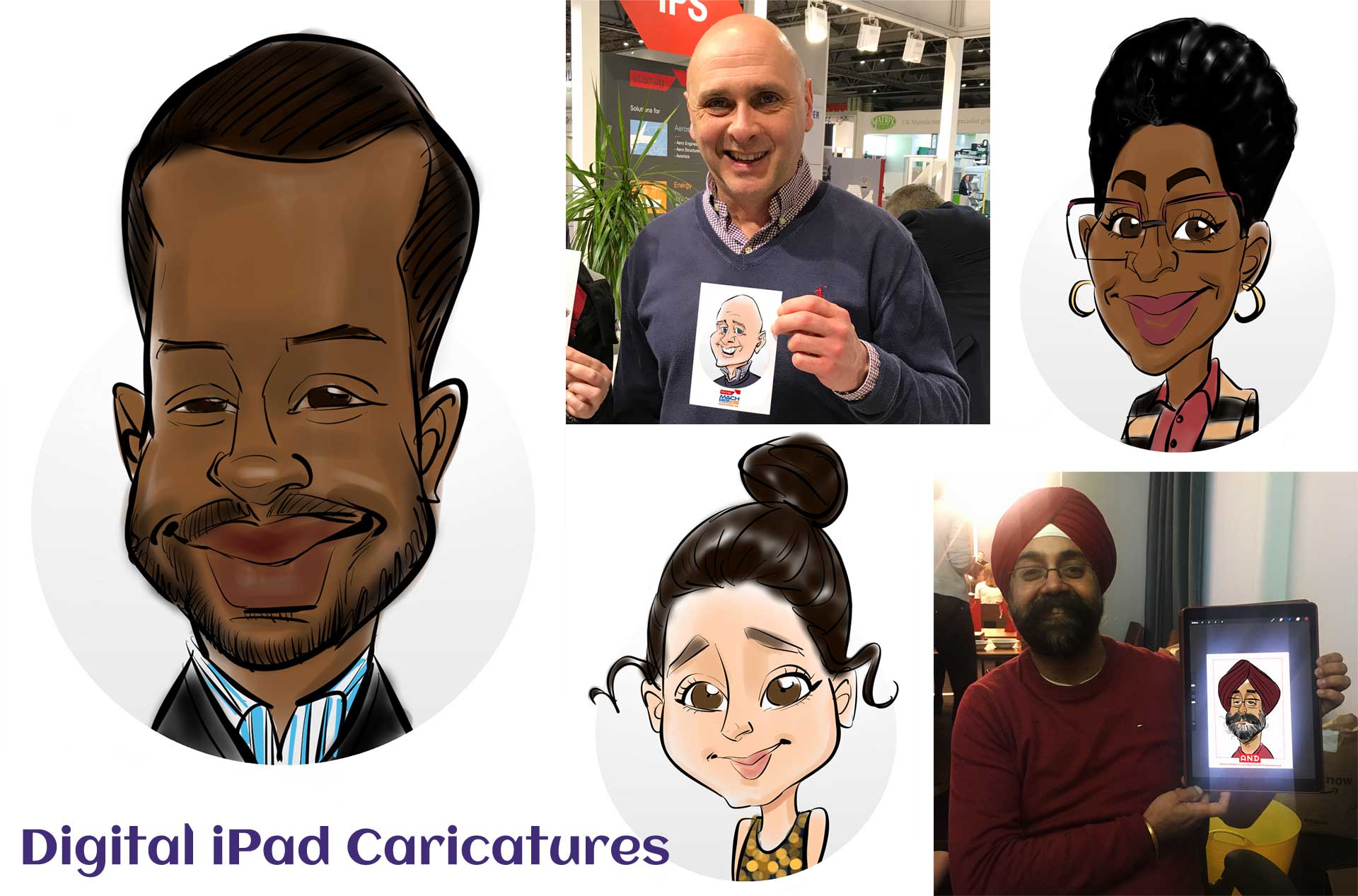 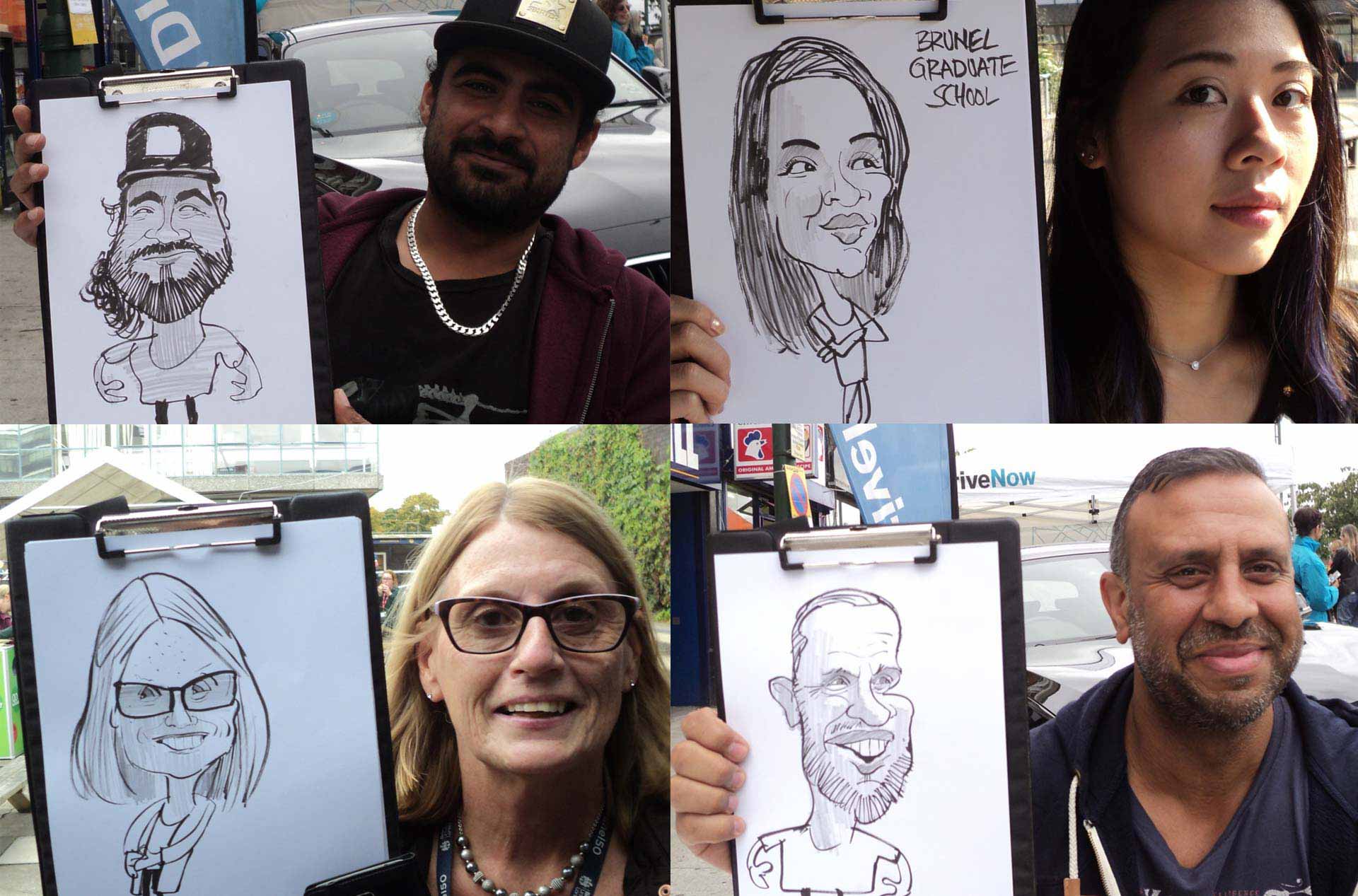 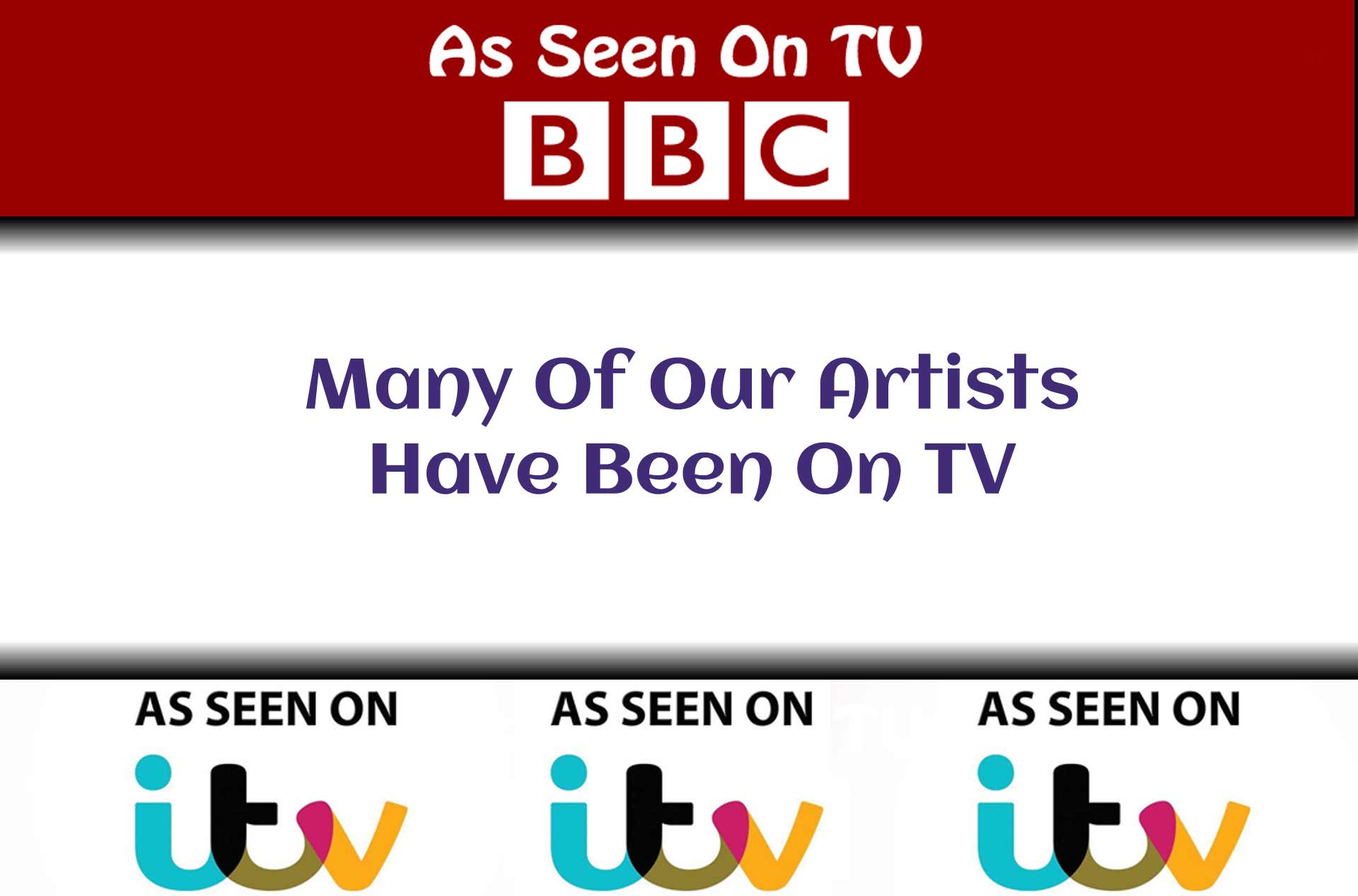 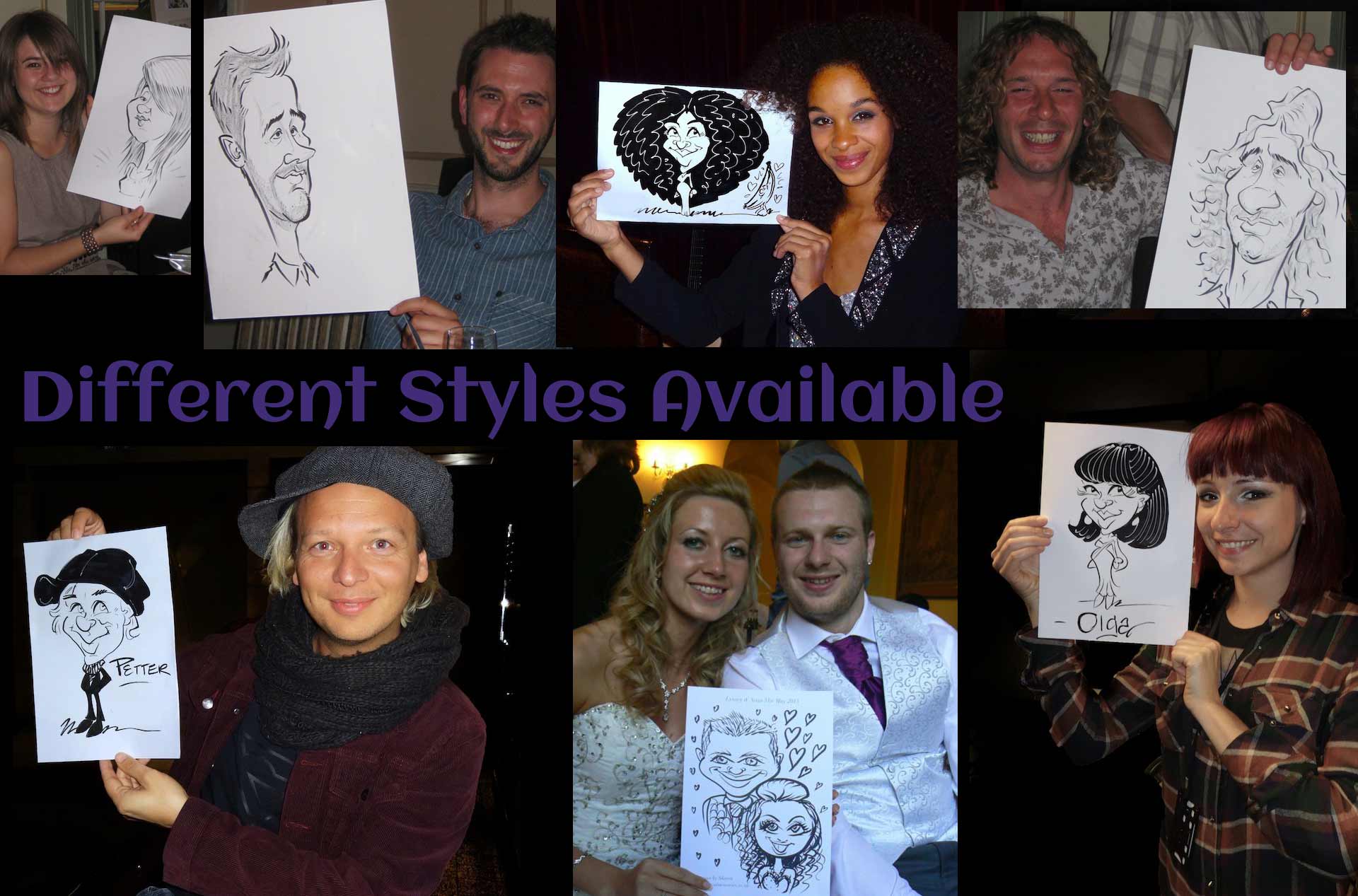 Magical Memories team of caricaturists can entertain guests at the start of the party or event, as an ice breaker during the arrival drinks reception. Other popular options include between courses of a meal, or as part of the evening entertainment. Our caricature experts always provide a superb talking point among guests.

Caricaturists can draw hilarious caricature portraits “mix and mingle” or from a static position, whichever option you prefer. Not only will our Oxfordshire caricaturists leave your guests with the most unique memento or souvenir that they will ever get (the caricatures), but the entertainment at your event will also leave a long and lasting impression for everyone.

Make your event Special. Find out what a Magical Memories Caricaturist can do for your event – contact us today.

We always receive great feedback about our fun caricaturists and the performance they provide. We receive testimonials following bookings, either by email or on our Facebook page.

Types Of Events Covered By Caricaturists

Our caricaturist have provided unique entertainment for weddings, at numerous types of corporate events and parties for A-list celebrities, well known large companies and of course, for countless private customers. Whatever the event, our experienced acts will thoroughly entertain you and your guests guaranteed! We have a great range of entertainers and styles available.

“Amazing!! – Could you please pass on a HUGE thank you to the caricaturist who did a fantastic job on Saturday. His drawings were fab and how quickly he did them was amazing. We had a fantastic day and he really was a great part of it. Thanks again”

“I just wanted to say a BIG thank you for Friday. The artist was absolutely brilliant, please pass on our gratitude to him. Thanks”

“The caricaturist was amazing! He seemed to enjoy the night as much as we did. We would love to have 2 caricaturist’s next year working for the same period so more people get a chance to have a drawing, we had 270 volunteers turn up on the night to support us! I will be in touch nearer the time … Kind regards “

“Amazing!! – Could you please pass on a HUGE thank you to the caricaturist who did a fantastic job on Saturday. His drawings were fab and how quickly he did them was amazing. We had a fantastic day and he really was a great part of it. Thanks again”

“I just wanted to say a BIG thank you for Friday. The artist was absolutely brilliant, please pass on our gratitude to him. Thanks”

“The caricaturist was amazing! He seemed to enjoy the night as much as we did. We would love to have 2 caricaturist’s next year working for the same period so more people get a chance to have a drawing, we had 270 volunteers turn up on the night to support us! I will be in touch nearer the time … Kind regards”

Magical Memories Caricaturists are available for any occasion.

All bookings are confirmed online. Magical Memories use a secure online booking system that is simple and easy to use. Step by step you can book your act, confirm the event details, make a payment and even sign a digital contract so you can be certain everything runs smoothly.

For all event bookings, we accept credit/debit card, PayPal, bacs or cheque and invoices for bookings are provided.

Around a week before your event, our entertainment experts will get in touch to run over all of the final details and times. On the day, the caricaturist will aim to arrive no later than half an hour before the agreed start time in order to meet you or the venue staff/organiser.

All that’s left to do at this stage is relax and enjoy the fun your Oxfordshire caricaturist will bring to your event!

So why not Book Your Oxfordshire Caricaturist Today?

Venues in the Oxfordshire area will require all acts and suppliers including caricaturists, to have public liability insurance for them to be able to work and provide entertainment onsite. All of our artists have PLI and many are members of Equity which include PLI as part of the membership deal so you can book with confidence.

What Do Oxfordshire Caricaturists Do?

Oxfordshire Caricature Artists draw fun, quick “on the spot” caricatures live at your wedding reception, private party or corporate event, creating a buzz wherever they go! All of our artists have a great sense of humour and are very friendly and personable.

Around 12 – 15 people per hour can receive drawings on average depending on the artist booked. Individuals, couples and even group caricatures can be drawn. For smaller events, colour can sometimes be added.

When you hire a caricaturist for your event, we can print the paper with a message/logo to add a special, personal touch. The artists can either mix and mingle or sit in one area or corner and a queue will form. Each caricature is given away FREE OF CHARGE to your guests. Guests will get to keep the caricatures free of charge and many frame them, and/or add the caricature portrait to social media profiles! 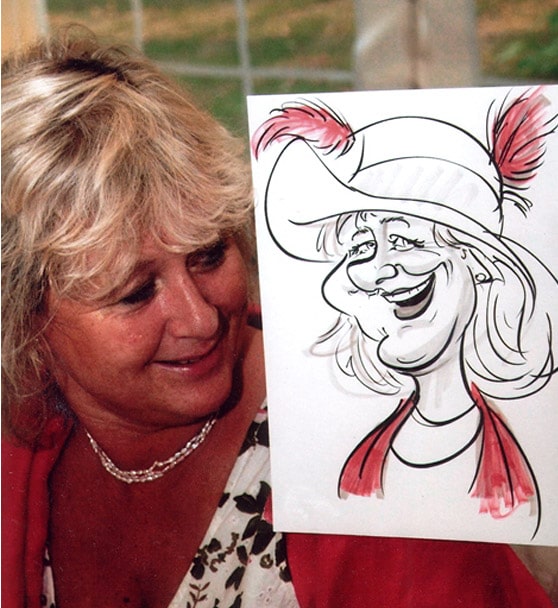 How Do We Choose Our Caricature Artists?

Magical Memories members have to tick an enormous amount of boxes before we allow them to join our professional and experienced organisation. Reliability, professionalism and talent are all key factors we look at when assessing a caricaturist looking to join.

Many agencies will take any entertainment act on who is willing to pay a joining fee, or any performer they feel is cheap enough for them to make a large profit on. We do not work in this manner and never have.

Magical Memories have been providing high-end entertainment all over the UK and of course in Oxfordshire for over 20 years so we know exactly what to look out for. Using our experience we can ensure you get the right kind of act at the right price and therefore produce 5* results. Many of our members have been with us from the very beginning!

All members have to have PLI 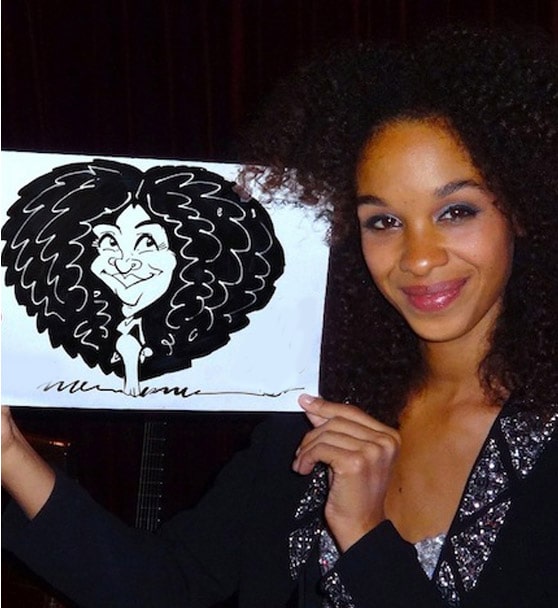 Which Events Do Caricaturists Attend? 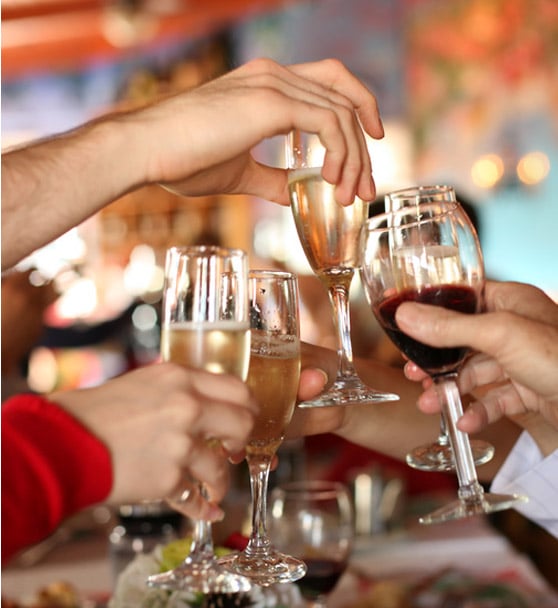 Looking for something totally unique – why not hire one of our Digital / iPad caricaturists for your event?

Digital caricatures are high quality, hand-drawn on the spot using an iPad or tablet and can be projected onto a bigger screen for a larger audience to see. The iPad caricatures (caricature portraits) can then be instantly printed at the event using a high-quality colour portrait printer. This type of new, novel and exciting way to draw caricatures is always a huge hit with guests young and old alike and gives amazing results.

Read More About Our iPad Caricaturists on our dedicated iPad caricaturist website page. 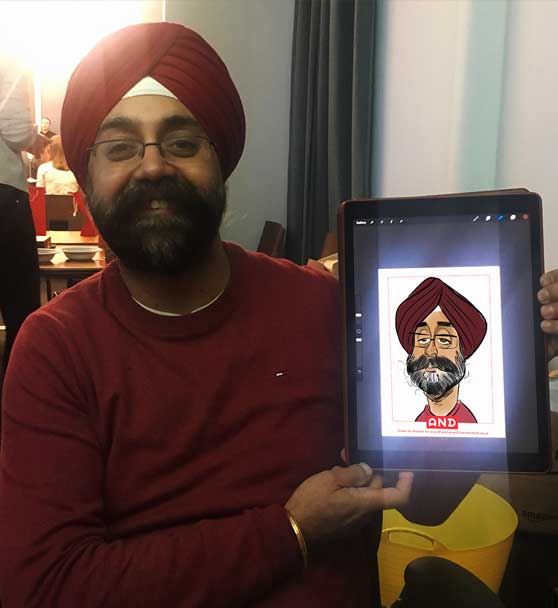 Towns and Cities Covered In Oxfordshire

Yes! I’d love a quote for my event or special occasion … Check Availability, Get Quotes and Make Enquiries Here

See Our Team Of Caricaturists ...

Do you have Caricaturists for Hire Near Me? Covering Oxfordshire? You bet!

Our Caricaturists cover Oxfordshire and we always use the closest artists to your event location in order to keep your costs (and fuel emissions) down to a minimum. That way you get top class, yet affordable Caricaturist local to your Oxfordshire function, that you can rely on.

No need to search any further for a local caricaturist for your event. Magical Memories can supply a caricaturist “near me” and cover all of the Oxfordshire area. Rest assured we’ll make your event one to remember!